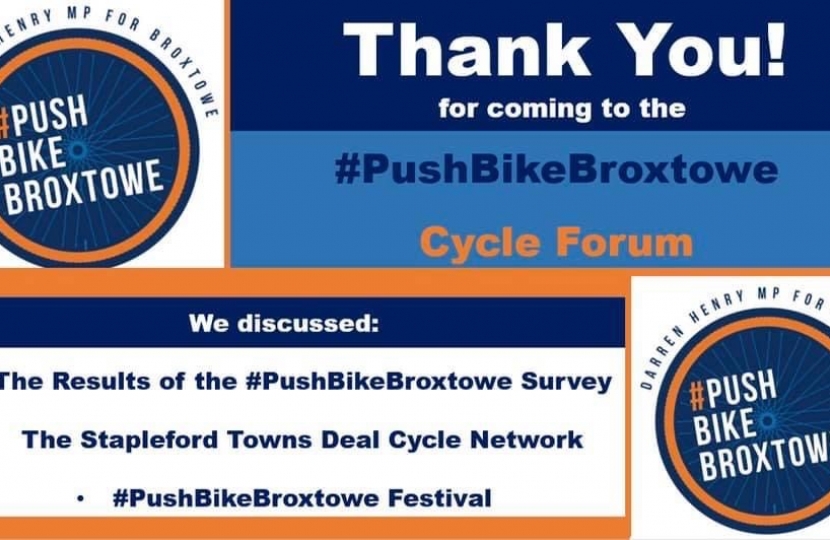 This summer has been great for the British cycling industry which has seen a large rise in the number of people around the UK cycling – especially in Broxtowe! In response to this, I invited the Prime Minister, Boris Johnson, to Broxtowe in July on the same day that he announced £2 billion in funding for walking and cycling. Following the Prime Minister’s visit I launched the #PushBikeBroxtowe cycle survey to further understand the needs of the local cycling community and ensure that any investment in cycling infrastructure in Broxtowe is cyclist-led, not simply guided by plans conjured up in an office, absent of user input.

On Wednesday 21st October I hosted the first #PushBikeBroxtowe Cycle Forum and invited those who took part in the survey to participate and was glad to see so many people attended. After an initial presentation of the results of the #PushBikeBroxtowe survey, I presented the current proposals for the Stapleford Towns Deal Cycle Network (attached below), and concluded by announcing the possibility of a #PushBikeBroxtowe festival next year.

During the presentation I opened the floor to questions directly from constituents who provided valuable insight and provoked ideas for further discussion. In particular, it was evident that many people agreed more should be done to help encourage women to cycle, that there is need for good quality cycle paths dedicated to cyclists, and that the biggest issue is, as one survey respondent said, ‘safety, safety, safety!’.

In the coming days I will ensure that all survey responses and any additional comments are fed directly to the relevant decision-making authorities and I have attached the presentation slides and the Stapleford Towns Deal Cycle Network map for your review below.