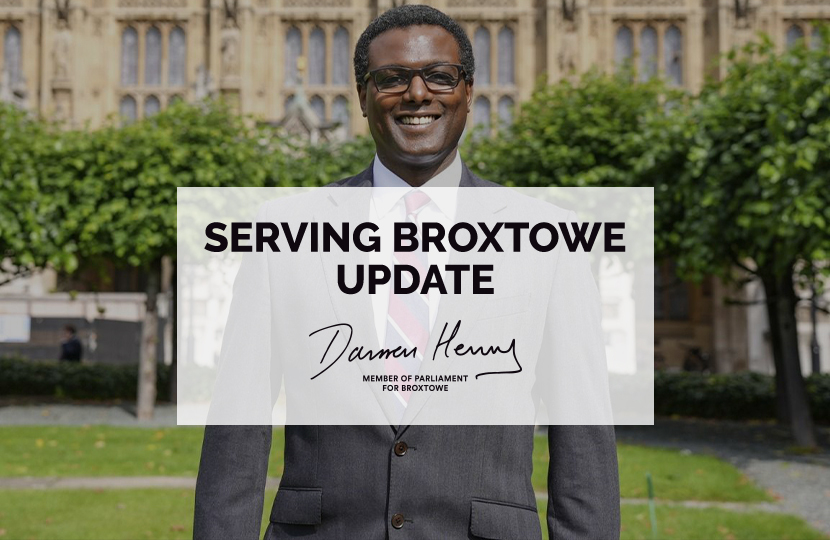 The Committee held several evidence sessions with experts from the housing sector as part of a project to improve the quality of social housing across the UK. We visited a couple of housing sites and met with tenants to listen to their views and concerns. Following this, I had the opportunity to question the Minister earlier this week and push for housing tenants to have a greater say in decision-making, something that will help to remove the stigma from the social housing sector and improve the quality of accommodation and experience for residents.

I have also been keen to raise the need for housing to be made available for veterans and their families. I asked a question in the House of Commons to see what can be done to support those members of the Armed Forces who have served their country to obtain suitable accommodation. I was pleased to highlight the work undertaken in Stapleford by Broxtowe Borough Council which has just opened brand new accommodation specifically for veterans. This is something I would like to see more of across the country.

We owe our veterans a great debt and it is only right that they should be given our support when in need. In addition to issues around housing, I attended a meeting with Nottinghamshire based charity Care After Combat to hear about the support they offer to veterans who have found themselves in the criminal justice system.

Ensuring that those who have served their country can receive the support they need to transition to civilian life is a key priority for me in Parliament and I will continue to speak up for our Armed Forces community.

I visited representatives of the Commonwealth War Graves Commission. This organisation does essential work in maintaining the graves of those Commonwealth Soldiers who gave their lives during the First and Second World Wars and helps to keep their memory alive.

21st - 28th May is War Graves Week. For anybody who is interested to find out more about the work of the Commission please visit www.CWGC.org to discover the skills and expertise needed to maintain graves at 23,000 locations worldwide, including at both Kimberley and Stapleford Cemeteries here in Broxtowe.

Earlier this month, we marked a new session of Parliament with the Queen’s Speech. I was pleased to hear the plans as part of the Government's agenda for levelling up, tackling mental health and growing our economy to address the cost of living. There are a total of 38 bills being proposed this session addressing key issues the people are rightly expecting the Government to address.

Furthermore, I took the opportunities to meet with several Government ministers over the past couple of weeks, making the case for Broxtowe. I met with the Secretary of State for International Trade and emphasised to her the need for UK businesses to be supported in the global export market. Across Broxtowe and Nottinghamshire, I have spoken to businesses who are keen to grasp the international opportunities on offer to them and I believe that the Government has a key role to play in promoting this to the world.

I also had the opportunity to meet with both the Secretary of State for Work and Pensions and with the Chancellor. I was able to raise the issue of pension credit and it is encouraging to see the DWP launching a campaign to boost uptake in this area. Around 25% of people eligible for pension credit have not applied and thanks to the Department’s efforts there has been an increase in 1700 people here in Broxtowe who have applied.

When speaking to the Chancellor, I discussed the issue of fraud, something that can affect the most vulnerable in our community. Tackling fraud requires a partnered approach with local police, national agencies and the Government. I am pleased to hear that the Treasury is taking this issue seriously and looking at ways to address fraud in our society.

One other aspect of my work in Parliament over the past few weeks was taking part in a delegated legislation committee, looking at the opening hours for entertainment and hospitality venues during the Queen’s Platinum Jubilee.

Hospitality has suffered over the past couple of years due to the COVID pandemic and I was pleased to support a temporary relaxation of opening hours which will give the industry a much-welcomed boost this summer.

This week, I had a really productive meeting with CityFibre, discussing high speed broadband rollout in #Broxtowe.

Digital connectivity is essential to levelling up and it is encouraging to see plans for Broxtowe to benefit from higher internet speeds helping local people and businesses to thrive online.

It was a pleasure to attend Nottinghamshire County Council’s Civic Service at St. Barnabas Cathedral in support of 'When You Wish Upon a Star' I was pleased to support this great event.

Since its founding, the Nottingham-based charity has helped over 18,000 children and supports hundreds of wishes each year helping to create precious memories for children and their families.

Walter Parker was awarded the Victoria Cross for his gallant service as a Royal Marine in the Gallipoli Campaign and it was great to see a good turnout to commemorate this local Stapleford hero.

Having It was good to be back visiting Nottingham Mail Centre in Beeston earlier this month; this time to view the new sorting machine which has made the operation more efficient, with improved utilisation of existing staff  so no job losses just a more effective process. Having first visited the centre 18 months ago it was great to see that over £2 million has been invested into the facility through those new parcel sorting machines.

Royal Mail provide a vital service for people here in Broxtowe and across the country and I will continue to offer my support to the industry which remains a significant employer for our local community.

Sunday 8th May marked Garden Day 2022. Gardens offer great opportunities for people to enjoy the outdoors and there are many benefits associated with gardening in improving people's emotional health and well-being.

I had a very enjoyable time at the Dig In Community Allotment in Stapleford the day before It was lovely to meet so many dedicated volunteers who help to make this project a great success.

It was a pleasure to attend Stapleford Town Council's Civic Service. This year marks the 35th Anniversary of the Town Council. I was delighted to hear about the Town Mayor's chosen charity Treetops Hospice, a great local organisation which the Council's fundraising events have helped to support throughout the year.

During the event, I met Sandra Hart who received the 2021 Mayor's Award for her efforts in Stapleford's Community Garden Competition.

Additionally, I would like to offer my congratulations to Cllr Jan Goold on her election as the new Town Mayor of Stapleford.  Jan does great work helping local residents and organisations across Stapleford and I know she will do an excellent job continuing to support Treetops and representing the town as Mayor.

I had a lovely afternoon attending the Nottinghamshire County Show last Saturday. It was great to see all the local businesses and stallholders showcasing the best local produce that our county has to offer. Thank you to the organisers for such a great event. I look forward to returning next year.

I was delighted to attend a performance of Communicating Doors by Beeston Players at Round Hill Primary School over the weekend. I am grateful to the cast for putting on such an enjoyable show. For anybody who would like to learn more about the group, please visit http://beestonplayers.org/

Yesterday, I held my regular catch-up meeting with Inspector Mike Ebbins, neighbourhood policing inspector for Broxtowe. There have been various issues raised with me about antisocial behaviour in Beeston and Chilwell as well as concerns about off-road bikes in Awsworth, Nuthall and Toton. I have been making the case for greater resources to be put into tackling these issues.

Also yesterday, I was at the Stapleford Towns Deal board meeting at Broxtowe Borough Council. The business cases have been submitted for the different projects which will bring £21.1 million worth of funding into the town. I was particularly pleased that £1 million is available for businesses in Stapleford.

The second round of the Town Centre Recovery Fund has opened for businesses in Stapleford. Following concerns raised to me that some local businesses had been excluded from the first round of grants, I am delighted that the boundary has been extended to support more of the town centre.

For more information on how businesses can apply, please visit https://www.broxtowe.gov.uk/towncentrerecoveryfund

To celebrate the Queen’s Platinum Jubilee, I am hosting an afternoon tea at my constituency office on Wednesday 1st June 1pm – 3pm. There will be tea, coffee and cakes available and all are welcome. I look forward to meeting you if you are able to attend.

I have two upcoming constituency surgeries. One in Beeston on Sunday 29th May and another in Kimberley on 11th June. If you would like to book a surgery please contact my office at: darren.henry.mp@parliament.uk or by calling 0115 671 2530.

Yesterday, I intervened during a debate on the High Speed Rail Bill, asking the Minister what discussions had taken place around the Eastern Leg of HS2.