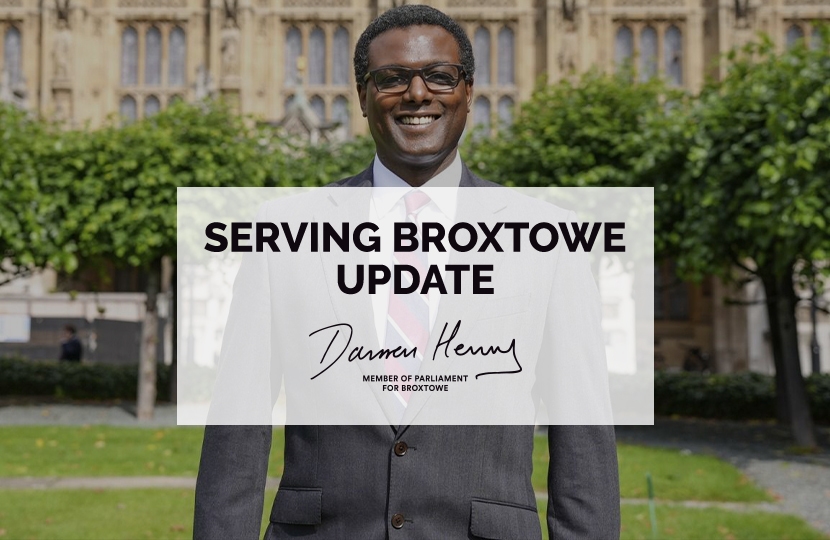 With Remembrance Day having taken place this week, it has been a time to reflect and remember the sacrifices made by our Armed Forces. This year is of particular significance commemorating 100 years since the founding of the Royal British Legion.

I was honoured to join soldiers from the 170 (Infrastructure Support) Engineer Group for the Remembrance Service at Chetwynd Barracks. I have also been running between war memorials across Broxtowe this week, raising funds for the Royal British Legion as part of my annual Poppy Run. The charity provides vital support to members of the Armed Forces, veterans and their families. Anybody wishing to donate can do so using the link below:

‘They shall grow not old, as we that are left grow old,
age shall not weary them, nor the years condemn.
At the going down of the sun and in the morning
We will remember them.’

I have been active in Parliament asking Ministers various questions in the Chamber on issues that matter to Broxtowe. This included a question to the Minister at the Department for Transport seeking clarification on the Government’s timescale for the Mini Hollands scheme which could offer the potential for cycling improvements in Stapleford.

I was also pleased to speak in Parliament on the Animal (Penalty Notices) Bill. As a nation of animal lovers we need to do everything we can to protect their welfare and tackle instances of abuse.

In my role as Co-chair of the Midlands Engine All-Party Parliamentary Group, I attended a meeting looking at digital infrastructure across the region. I am pushing for better digital connectivity for the Midlands such as the increased rollout of 5G and full fibre broadband services which will help to provide real benefits to Broxtowe’s economy for the long term.

As part of Parliament’s commemoration of Armistice Day, it was a privilege to plant the remembrance stick in the Constituency Garden of Remembrance, proudly dedicating it to the 170 (Infrastructure Support) Engineer Group based at Chetwynd Barracks.

I have also held a virtual meeting with Network Rail looking at the issues surrounding the tin bridge at Dovecote Lane as well as access for all funding seeking to make improvements to Beeston Railway Station. Although the tin bridge is unlikely to be replaced in the immediate future, I am working to look at improvements for cycling connectivity in Beeston. I will continue to liaise with Network Rail and Friends of Beeston Station on improved access to Beeston Station.

1st – 7th November was UK Parliament Week. Multiple organisations across Broxtowe took part in this event and I was delighted to attend virtual assemblies with both Fairfield Primary Academy and Eskdale Junior Schools answering questions from pupils about my role.

I want to offer my thanks to all schools, groups and organisations in Broxtowe that took part. I was delighted to engage with young people across the constituency about our democracy and I look forward to continuing this vital role as your Member of Parliament.

A Tribute to Jim Lester

Although I never met Jim personally, I know from speaking to colleagues of all political persuasions the level of respect and admiration they had for Jim. His expertise on Foreign Affairs were widely renowned and he became a source of knowledge in the house for many new MPs.

I would like to offer my most sincere condolences to his family and friends on the passing of a truly exceptional public servant, who will be sorely missed by Broxtowe but fondly remembered for the many years of dedicated service he gave to his constituents.

I have been out and about across Broxtowe meeting different organisations and listening to their views and concerns. This included a visit to Rumbletums in Kimberley, the Well-Being Café in Toton and an impromptu visit to the Silver Surfers Group at St. Michael and All Angel’s Church in Bramcote, whose members were kind enough to donate £66 towards my Poppy Run.

Last Saturday, I also took part in the Stop the Hate Walk in Stapleford seeking to raise awareness of the impact of Knife Crime. I was pleased to see support from the local community in seeking to tackle this incredibly serious issue.

On Tuesday MPs voted for the introduction of new measures to combat the spread of the Omicron variant of COVID-19.

These new measures include: